The Romano-Germanic Museum was opened in 1974 on the former site of a Roman urban villa just to the south of the cathedral.  It was the result of the fusion of two collections owned by the City of Cologne: the Roman collection that, since 1935, had formed the Roman and Germanic Departments of the Wallraf-Richartz Museum, and the collection of the Prehistoric Museum, known since 1926 as the Museum of Prehistory and Early History.

The Museum of Prehistory and Early History, founded in 1907, concentrated mainly on the prehistoric cultures of the Rhineland. The origin of the Roman Department of the Wallraf-Richartz Museum dates back to the collection of Franz Ferdinand Wallraf (1748-1824) who bequeathed it to the City of Cologne in his will. The museum's collections grew considerably with the purchase of the private collections of Carl Anton Niessen (1934), Baron Johannes von Diergardt  (1935) and Franz Wollmann (1939/40) as well as with the regular excavations carried out in Cologne.

The extensive destruction endured by Cologne in the Second World War did not spare the city's museums. The Wallraf-Richartz Museum managed to get the major part of its collections to safety in emergency depositories outside Cologne, although some of the archives were destroyed in the bombing. The collection of the Museum of Prehistory and Early History suffered heavy losses.

After the war, the return of the evacuated museum collections was organised by Fritz Fremersdorf (1894-1983), the first director of the Romano-Germanic Museum, which had already been founded in October 1946. Its location to the south of the cathedral was determined by that of the world-famous Dionysos mosaic, discovered there in 1941 during the construction of an air-raid shelter. Until the opening of the new building on March 4, 1974, the museum's sizable collections were displayed in temporary exhibition  rooms. More than 20 million people have visited the museum since its opening. 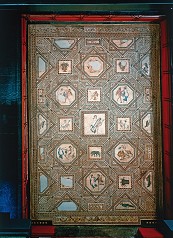 The Dionysos Mosaic in the Romano-Germanic Museum (7 x 10.6 m) is made up of more than a million tesserae, tiny tiles made of stone, glass and clay. 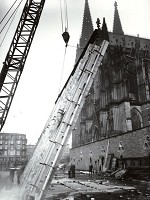 Re-laying the Dionysos Mosaic where it was originally found

Poblicius' funerary monument after its reconstruction. The Romano-Germanic Museum was being built at the time (1972/73)

Excavations in the Luxemburger-Strasse in 1897 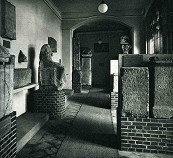 Stone monuments in the Roman Department of the Wallraf-Richartz Museum 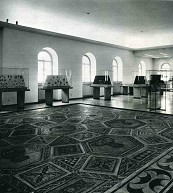