The Romano-Germanic Museum of Cologne displays the archaeological heritage of the city and its environs in an area measuring approximately 4,500 square metres. The exhibits represent 100,000 years of settlement history in the Rhineland, from Palaeolithic times to the early Middle Ages.

The oldest finds in the museum relate to the hunter-gatherers who roamed throughout the Rhineland in the Palaeolithic and Mesolithic eras. In the 6th millennium BC, people settled in villages and lived in large byre-dwellings. The discovery of the Linear-Pottery-Culture settlement in Cologne-Lindenthal was a milestone in Neolithic research in Europe. Stone tools, weapons and hand-made pottery vessels reflect the daily life of these people who lived almost 8,000 year ago.

Finds from burials and settlements of the pre-Roman Bronze and Iron Ages reflect subsequent agricultural societies in the Rhineland. In the last millennium BC, the Rhineland was settled by Celtic and Germanic tribes who buried their dead under grave mounds, accompanied by pottery vessels and stone and metal objects for their journey to the after-world.

The main emphasis of the museum is on the evidence of the Roman history of Cologne, which lasted almost five hundred years. A miniature bust of the Emperor Augustus, made of black glass with a turquoise-green coating, is a reminder of the founder of the city. Both the world-famous Dionysos Mosaic, dating to the 3rd century AD, and the 15-metre-high monument to the veteran legionary Lucius Poblicius from the 1st century AD can be admired − day and night − from outside the museum through the large panorama window.

Significant reminders of the city's history include the massive stone arch from the northern gate that bears the city's initials CCAA (Colonia Claudia Ara Agrippinensium). The Romano-Germanic Museum also has the worldwide largest collection of Roman glass from the 1st to 4th centuries: worth particular mention here are the large number of luxurious Roman glass vessels, such as the mould-blown figurative flasks, the 'snake-thread' vessels, cut glass and, of course, the spectacular cage cup.

Roman goldsmiths and stonemasons also created magnificent objects, valuable amber miniatures for example. Lavish wall paintings and costly mosaics, such as the well-known Philosophers Mosaic, furnished elegant town houses that also contained objects made by Cologne potters: for example, the hunting goblets that were traded as far afield as England.

The magnificent examples of the goldsmith's art collected by Baron Johannes von Diergardt make up one of the most outstanding international collections of gold jewellery of the Migration Period. Costume elements worn by Eurasian nomads and the Germanic tribes of the 4th to 6th centuries were found throughout Europe, from the Crimea to Spain. The Kerch crown, temple rings and the diadem from Tiligul are world famous.

The youngest finds in the Romano-Germanic Museum date to the Merovingian period (5th-7th centuries). Frankish burials of the urban inhabitants and the village communities around Cologne often contained numerous grave goods intended for use in the life in the hereafter. These grave goods are evidence of early medieval cultural history.

Pottery vessels and stone tools from the Linear-Pottery-Culture settlement in Cologne-Lindenthal, 6th/5th century BC.

Finds from the grave of a Frankish girl in Cologne-Worringen. 6th century 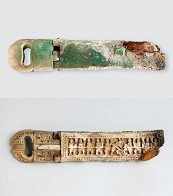 Reconstructed arch of the CCAA northern gate on the upper floor of the RGM.

Flat-bodied flask made of colourless glass with an applied 'snake-thread' decoration in several colours. Known as the 'Masterpiece'. Height 27.5 cm. 3rd century AD. Found in 1893, in a sarcophagus on Luxemburger-Strasse.

Shell goblet, made of colourless glass with an applied decoration of shells and white, yellow and blue glass threads. Height 20.8 cm. Second half of the 4th century AD. Found in the street called Kartäuserhof.

Achilles goblet made of colourless glass with polychrome painting. Height 24.5 cm. 1st half of the 3rd century AD, Found at Richard-Wagner-Strasse 47.

Cage cup (vas diatretum) made of clear colourless glass in a 'cage' of red, yellow and green glass. Cast in a mould, then glass removed by cutting and grinding. Height 12.1 cm. The Greek inscription reads "drink, live well, for ever". First half of the 4th century AD. Found in 1960, in a grave on a rural Roman estate in Cologne-Braunsfeld. 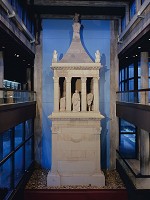 Funerary monument to Lucius Poblicius in the RGM. Middle of the 1st century AD. 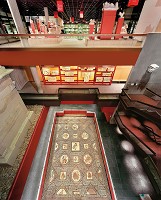 The world-famous Dionysos Mosaic in the Romano-Germanic Museum.

Interior view of the Romano-Germanic Museum

Small terracotta sculpture of a group of matrons from the Cologne workshop of Fabricius. The inscription on the back indicates it was made in CCAA. 2nd half of the 2nd century AD.

Large theatre mask made of limestone. 1st century AD. Found during excavations in the Roman cemetery at Chlodwigplatz.

An early Cologne woman: tombstone of Roman Balla with a baby, erected by her husband Longinus.