THE PROTECTION OF HISTORICAL MONUMENTS

The history of the Romano-Germanic Museum in Cologne has always been linked with the protection of archaeological monuments. In 1980, the Protection of Historical Monuments Law of North Rhine-Westphalia replaced the previously valid Prussian Archaeological Excavation Law of 1914/20. Since then, North Rhine-Westphalia has had one of the most progressive historical monuments protection laws in Germany. The law was amended in 2013.

This has not affected the lex Colonia regarding Cologne's special status. The Romano-Germanic Museum is also the agency responsible for the protection of archaeological monuments in the at least 400 square kilometre urban area of Cologne. The City of Cologne receives substantial annual funding from the historical-monuments support programme of the State of North Rhine-Westphalia.

Municipal building oversight includes the examination of all applications for construction permits to determine whether archaeological sites or listed historical monuments are endangered by the project. If this is the case, the builder and architect are invited to discuss the reasons and the estimated duration of the archaeological rescue excavations before construction can actually begin and thus give the builder planning reliability.

The duration of the archaeological investigations depends on the size of the area involved and the depth of the archaeological layers as well as the type and complexity of the expected finds. In the course of the approximately one hundred years of historical-monument protection in the urban area of Cologne more than 3000 old find reports have been filed away so that find expectations can often be very precisely predicted.

On this basis, the time needed for excavations can be set in the contract between the builder and the Romano-Germanic Museum. Today, the fear that archaeologists will "take possession" of a site with endless excavations is unfounded.

Chlodwigplatz: grave goods made of glass in Roman graves of the 1st to 3rd centuries AD.

Chlodwigplatz: limestone containers and glass urns from graves of the 2nd century AD.

Excavations in the 1970s in the area around Gross Sankt Martin's Church.

Kurt-Hackenberg-Platz: excavation of the Roman harbour in 2006.

The Roman cemetery along Luxemburger Strasse. Sarcophagi and ash containers found in 1897.

Work on the sewage system at the Eigelstein around 1890. 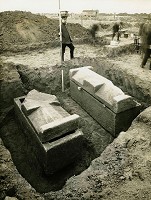 Late-Roman sarcophagi burials linked with the villa rustica in Cologne-Müngersdorf, 1925/26 .

Near the Town Hall: archaeology in war-damaged Cologne.

Excavations near the Cathedral 1948/49

Divitia fort: the preserved walls of the eastern gateway in 1931.

Excavations in front of the Cathedral 1969/70